Tai chi or rather tai chi chuan has very ancient roots. Its two primary sources are the fighting techniques of the Chinese wushu on the one hand, and on the other hand taoist meditation, health exercises (qi-gong) and vision of life. Both aspects are unified in tai chi chuan and, also because of the need of popularising the art in the 20st century, in this way it grew to become what we know today as the slow and soft "shadow-boxing". The three major pillars to tai chi are self-defence, health and meditation. When the aspects of boxing and self-defence are not given due attention, one can speak of taichi-qigong, tai chi practised solely for better health.

Among others tai chi chuan is based on a neoconfucian (and taoist) vision of life, and is a part of a general "tai chi-culture". Herein the original state of the universe is one undivided whole, Wu chi, which splits up into two complementary opposites, yin en yang. When yin and yang change into each other in a cyclical movement, the working of tai chi emerges. This process is pictured in the well-known Tai chi-symbol:

So, Tai chi emerges from Wu chi, and is a representation of the workings of the universe and of nature. Tai chi chuan is the martial art in which the movements follow this principle or even "are" them. Just like aikido, tai chi as a martial art is based on the flow and the workings of the universe: the Tao in China, Kannagara no michi in Japan.

Because the workings of yin and yang are essential for tai chi, making a distinction between "full" and" empty" is most important while executing the form. The form begins and ends in the wu-chi posture where our gravity is evenly spread, "the original state" as a matter of speaking. An uneven spread of gravity causes the emergence of "full" and "empty", this is of yin and yang, and becomes in this way the source of tai chi chuan-movement. 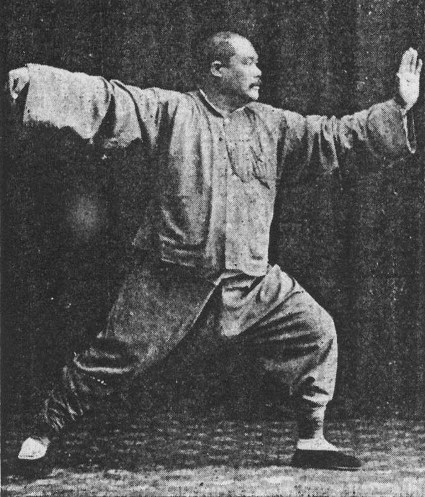 The history of tai chi is very complex. The different styles (Chen, Yang, Wu, Wu(hao) en Sun) have each their vision on how to move your body and on technique, on energy and form. Some are more athletic and practice deep large stances, and high kicks. Others use a more natural posture and a "small frame". Nevertheless, the basic ideas remain the same.

The occidental transcription of Chinese words (the "romanisation") is not uniform and sometimes causes misunderstandings. Tai chi is also written as "taiji", Wu chi as "Wuji", tai chi chuan as "taiji quan". These are other notations for the same art.