The crane, a powerful symbol

The crane has made an impression on all cultures worldwide, and received strong symbolic value. On top of that, its graceful movements have inspired martial art forms, and the crane became a marked peace symbol in post-war Japan.

Word has it that the daughter of a famous Chinese martial artist lost every fight with a crane bird, despite her fathers good tuition. She therefore began to study the animals movement patterns, which led her to develop new martial art forms. The wushu crane styles are known for their supple beauty.

The crane is a worldwide symbol for health, longevity, faithfulness and good fortune, though it is especially prominent in East Asia. In Vietnam, the crane is depicted on the national flag. In Japan during the shogunate, cranes were protected and viewed as holy. With the invention of origami around 1700, the legend took hold that whoever folds a thousand cranes will see their wish come true. Yet the crane is also a symbol of vigilance, and is known to fight only in self-defence.

Another new dimension was added to the crane with the moving story of Sadako Sasaki, who as a toddler became a victim of radioactive fallout after the nuclear bomb on Hiroshima. She grew up to be a young athlete, but developed leukaemia, the bomb sickness, at the age of eleven. Following an old Japanese legend which her best friend Chizuko told her beginning august 1955, she resolved to fold a thousand cranes when already severely ill, wishing to be able to run again. Sasaki didnt get past 644 and died on the 25th of October 1955 at the age of twelve. Her friends folded the remaining cranes after her death, and eventually, a statue dedicated to her memory was erected in the Hiroshima Peace Park in 1958. Since then, the thousand folded cranes have become a universal symbol of the peace wish. Sadako grew into a heroine for many girls in Japan. Her story is told in some Japanese schools on the anniversary of the Hiroshima bombing. Dedicated to her, people all over Japan celebrate August 6 as the annual peace day. 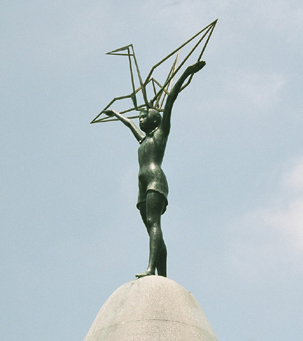 As such, the crane is very fitting to embody our project of nonviolent martial art, a powerful symbol.